SS-GB is Archer of the Yard a Collaborator? 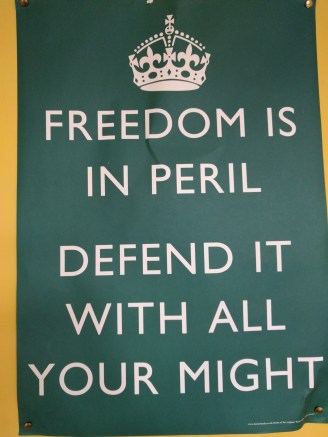 Is Archer of the Yard just doing his civil police job or is he a Nazi collaborator?

I have a fascination with the moral dilemma of being a collaborator or changing sides in civil wars and occupations. None more so than the situation that Archer of the Yard finds himself in with SS-GB.

Let’s unpack Archer’s moral dilemma a little, and see whether we think he’s just doing the job, or whether he’s facilitating the worst excesses of Nazism by being a collaborator.

The oath of a constable hasn’t changed much over the centuries. It’s had an update earlier this century to add fairness, but essentially it’s the same as the oath of office Archer would have taken when he joined the Met Police.

To serve the King and “…to the best of my power cause the peace to be kept and preserved, and prevent all offences against the persons and properties of His Majesty’s subjects…”

That’s the core of the constable’s oath. He’s promising to uphold the law and keep the peace. The constable is doing it on behalf of the King, but his duty is to the law.

Unlike soldiers, who promise loyalty to the King, his heirs and successors and the officers appointed above them, there is no explicit duty to serve the King or government. In fact this independence of the constabulary to uphold the law, against the government if need be, sets them apart.

Archer has no oath of loyalty that says he must oppose the Germans. In staying in his job and catching criminals he’s displaying his loyalty to his country’s law.

Archer as a Collaborator

The niceties of law and oaths of office aside, Archer is working with Germans. For some this alone marks Archer as a Collaborator. We see this in the comments and attitudes of many of the other characters. Even his son asks this.

The mere fact if having a German boss is compounded when Dr Huth arrives. Archer is seen in company of SS troops, often rounding up people and taking them away. Despite his best efforts wherever he goes the SS follow and arrest people. Even at his son’s school a master and several older boys are taken in for questioning.

Archer, his son and household directly benefit from him keeping his job. As well as pay he gets extra rations and has access to a car.

While in the job he gets to influence what the Germans are doing. His influence is low, but not nonexistent. He facilitates the escape of his erstwhile secretary and also turns a blind eye to other resistance activity. Where he can he frustrates the occupation forces in small ways.

Archer isn’t stupid. He’s well aware of how others see him. He knows there are people that would kill him given an opportunity. When he talks to the press he stresses the apolitical nature of his work and non involvement in doing the Germans dirty work.

Archer has seen the Germans at first hand. He’s met the SS and Gestapo that chase the resistance, they work in the building next door. He knows that they are brutal and inhuman. Archer is also aware that they’re the people that would replace him and his colleagues if they quit.

There’s also the fact that the war is pretty much over. There isn’t a prospect of the US launching a cross-atlantic assault to free Britain. The only real hope Britain might have is that the Germans decide to go home in a couple of years having installed a friendly puppet government. That’s the point Britain might restore itself the way Germany did after WW1.

In the meantime Archer believes that staying in post and maintaining the standards and forms of the prewar ways is the best hope to enable return. Giving up and letting the Germans take over will lead to anarchy, brutality and many avoidable British deaths.

He might be wrong. He might be dragged into helping the Germans with their brutality and rounding up of British patriots.

That’s Archer’s dilemma. Be thought a collaborator but prevent a more excessive regime, or escape and let the excesses happen.