Alexander asked me how tall I was when I was his age, and I found this piece of my early writing in the book that my mother recorded such things – a story entitled ‘My Kitten’.

It’s not precisely dated, but it refers to my baby brother, and that gives it a window for when he was a baby. So I was seven when I wrote it, in the very late 1970s. 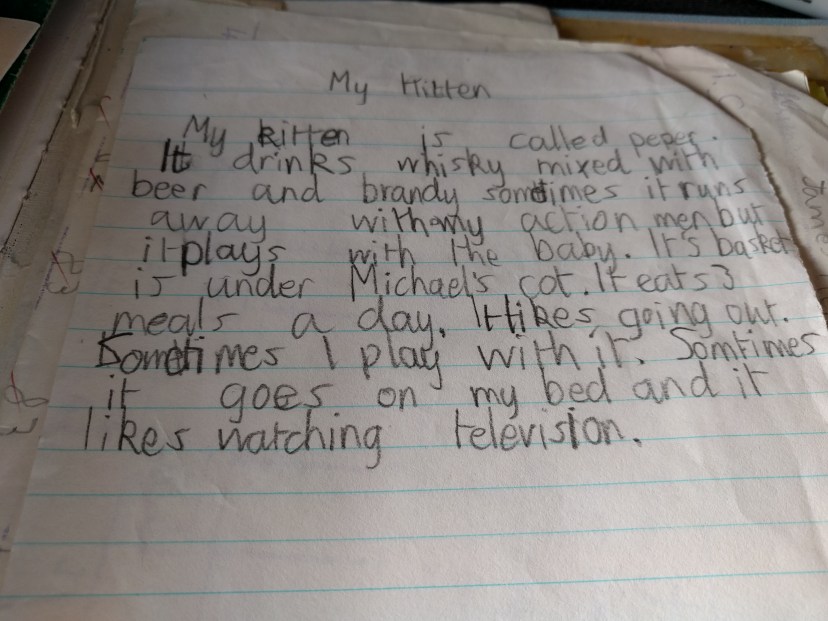 My kitten is called peper. It drinks whisky mixed with beer and brandy. Sometimes it runs away with with my action men but it plays with the baby. It’s basket is under Michael’s cot. It eats 3 meals a day. It likes going out. Sometimes I play with it. Sometimes it goes on my bed and it likes watching television.

‘My Kitten’ is definitely a piece of fiction, we never had a kitten when I was a child. My only pets growing up were goldfish. There were several of those, and I do remember changing the water and cleaning their bowl out. I would have remembered if we’d had a kitten too. Apart from anything else I seem to be allergic to cats, which might not have been the case if we’d had them in the house when I was growing up!

I’m reasonably impressed with the insight. I must have had a friend with a kitten, other than the fantastic drinks it seems real enough. I think this probably also represents the high point of the clarity of my handwriting!

For the record, I also found the measurements my mum made around my birthdays each year from 1 to age 18. Alexander and I marked them on the door frame where we also record his and his sister’s height from time to time. He’s about two years ahead of me height wise, so I expect he’ll end up quite a bit taller than I am. At 11 years and one month he is 1cm shorter than I was when I turned 13.