Themself passed the 500 posts milestone earlier this week. I’ve been specifically writing for Themself since 5th July 2006, so it has taken me a decade to write 500 posts. That said, the earliest posts date from 1995, but they were originally written for the Chestnut Lodge Wargames Group newsletter Milmud.

Of the posts I’ve written, 15 were slotted in before the real start of the blog. All of those come from other things I’d written for publication elsewhere.

Part of the nature of the very early blog posts was that I didn’t have a topic in mind, so they’re pretty short and random. These days they’d probably turn up as facebook status updates. Back then there wasn’t a facebook (or at least I didn’t have an account). 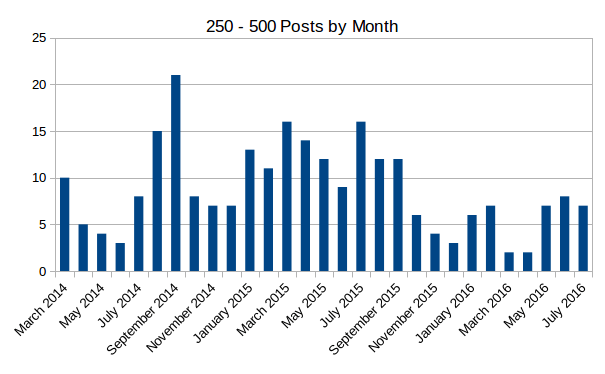 What really turned up the heat was doing the creative writing course with the OU, which I’ve written a book about – and you can get a free copy of Themself from Amazon over the next few days. That course started in 2013, and since then I’ve written over half the material on the blog. As seen in the graph.

I don’t have stats all the way back, I only have them from when I installed and activated the jetpack plugin for wordpress. Before wordpress I had a movable type blog, and before that I used dokuwiki. So not all of the 500 posts actually have any views recorded (those would be the 30 recorded as ‘other’ above).

This list are the ten most popular posts since the stats started on 23 Sept 2013 until the beginning of July 2016.

Bar two all of those posts post-date my creative writing course, so I think I may be getting better at writing!